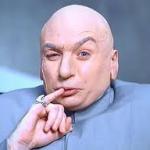 His father was from St.Joseph, Missouri, was a designer and builder of bicycle accessories, and was a solid family man and there is no evidence to prove otherwise.
His mother was a normal and healthy adult named Beatrice. She was 32 when she gave birth to Orson
reply
CometHunter
1 up, 1y
@ revjames- I want to be clear...all comments are aimed at the meme itself, and not at you personally.
reply
orangemanbad
0 ups, 1y,
1 reply
Have you seen F for Fake? By Orson Welles.
I dont really understand what your meaning behind this meme is. Obviously thats all Dr Evil.
reply
revjames
0 ups, 11m
because of the wayback machine this will now be #History You're welcome
Show More Comments
Flip Settings
memes
gifs
other

Caption this Meme
Created with the Imgflip Meme Generator
IMAGE DESCRIPTION:
"MY FATHER WAS A RELENTLESSLY SELF-IMPROVING BOULANGERIE OWNER FROM BELGIUM WITH LOW GRADE NARCOLEPSY AND A PENCHANT FOR BUGGERY. MY MOTHER WAS A FIFTEEN YEAR OLD FRENCH PROSTITUTE NAMED CHLOE WITH WEBBED FEET. MY FATHER WOULD WOMANIZE, HE WOULD DRINK, HE WOULD MAKE OUTRAGEOUS CLAIMS LIKE HE INVENTED THE QUESTION MARK. SOME TIMES HE WOULD ACCUSE CHESTNUTS OF BEING LAZY, THE SORT OF GENERAL MALAISE THAT ONLY THE GENIUS POSSESS AND THE INSANE LAMENT."; -ORSON WELLES
hotkeys: D = random, W = upvote, S = downvote, A = back
Feedback
<![endif]-->