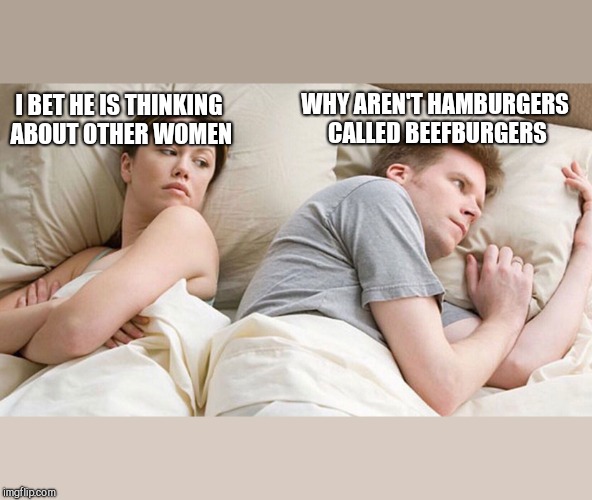 It's origins are disputed.
Some sources say it was a Chicago area fry cook who sometime in the 1880s was trying to cook a meatball on a grill for impatient customers. He got annoyed and flattened it so it would cook faster and served it on a roll.
It eventually made its way to a World's Fair and took off from there.
Wikipedia lists many people who claim to have invented it including the fact that it could have been derrived from the Hamburg steak which has been around since the 1600s.
There really is no way to say definitevely since there is no real historical record ofbits true origins
reply
dannyhogan200
2 ups, 1y Caption this Meme
Created with the Imgflip Meme Generator
IMAGE DESCRIPTION:
I BET HE IS THINKING ABOUT OTHER WOMEN; WHY AREN'T HAMBURGERS CALLED BEEFBURGERS
hotkeys: D = random, W = upvote, S = downvote, A = back
Feedback
<![endif]-->