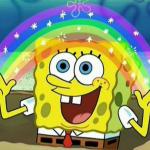 just had to say that, i'm a huge fan and get annoyed when people are wrong. sorry. again.
reply
IWillBuryYouInMyLawn
0 ups, 1y,
1 reply
Sorry and thanks for telling me. My brother told me Spongebob was turning 20, and I did think for a second something was off, but I didn't take much time to ponder about it. As a huge Spongebob fan also, I feel ashamed for not knowing that. Lol
reply
Sahara-jj
0 ups, 1y,
1 reply
; ) we SpongeBob fans have to stick together, and that means we help each other!
It's a common mistake for people to confuse the show's anniversary with SpongeBob's actual birthday, and even fans can be mistaken sometimes.
Hey, fun fact! Did you know that Patrick and Gary are related??
reply
IWillBuryYouInMyLawn
0 ups, 1y,
1 reply
lol no way! that's amazing.
reply
Sahara-jj
0 ups, 1y
they are actually first cousins!
it's in the episode "Rule of Dumb", which is from season 4.
reply
Hyperqueen
0 ups, 10m
And too me! Lil I was born on spongebobs birthday
Show More Comments
Flip Settings
memes
gifs
other