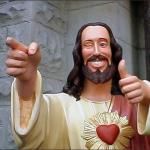 Caption this Meme
Best first
Latest first
Oldest first
3 Comments
Truthlover
1 up, 3y,
1 reply
Actually He does do it Himself. Romans 10:17-18

He uses people to compele people more. He uses more than one witness.
[deleted]
1 up, 3y,
1 reply
Thank you for sharing that with me but Romans 10:17-18 is an example of God using mere mortals to spread his word. That is not doing it himself. Perhaps you misread my meme?
Truthlover
0 ups, 3y
In 10:18 Paul is quoting psalm 19:1-4 where it is talking ablut creation.

The heavens declare the glory of God,
and the sky above proclaims his handiwork.
Day to day pours out speech,
and night to night reveals knowledge.
There is no speech, nor are there words,
whose voice is not heard.
Their voice goes out through all the earth,
and their words to the end of the world.

This is showing that allen every where has heard and knows Gods righteous decrees. He died for all men and wants all men to be saved. You’re version of God is small
Show More Comments
Flip Settings

Caption this Meme
Created with the Imgflip Meme Generator
EXTRA IMAGES ADDED: 1
IMAGE DESCRIPTION:
IF GOD IS SO POWERFUL BEYOND ALL IMAGINATION; WHY DOES HE NEED THE HELP OF MERE MORTALS TO SPREAD HIS GOSPEL WHEN HE CAN DO IT HIMSELF?
hotkeys: D = random, W = upvote, S = downvote, A = back
Feedback