Nothing to see here... again 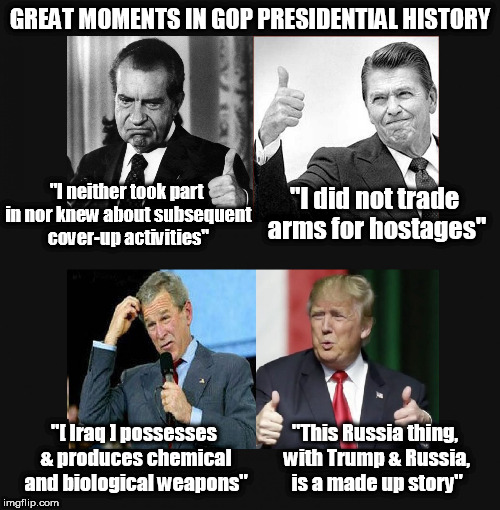 being a liar in the only thing bi-partisan in politics
reply
VinceVance
3 ups, 3y reply
LoneFunman
1 up, 3y,
1 reply
A good overall point. However, other than LBJ, it's false equivalency for severity & seriousness of results of the lies. Also, did Carter himself say he was a nuclear engineer? I can't find documentation on that.
reply
rdevita
2 ups, 3y
tru dat. Point-set-match.
reply
[deleted]
1 up, 3y,
1 reply
"People can quarrel with whether we should have more troops in Afghanistan or internationalize Iraq or whatever, but it is incontestable that on the day I left office, there were unaccounted for stocks of biological and chemical weapons."
-- Ex President Bill Clinton, Jul. 22, 2003 (Interview with CNN Larry King)

BTW, the NYT blames W for not giving troops the right training and equipment in handling chem weapons that they had to dispose of in Iraq. article circa oct 2014.
reply
LoneFunman
0 ups, 3y,
1 reply
By that time of that quote (2003), there was copious amounts of information that it was more than likely incorrect. The Cheney/Bush Admin was covering up evidence and coercing staff to present only the info it wanted the public to see. It promoted the lies of "Curveball" and planted over-hyped stories in the NYT.
- http://www.latimes.com/world/middleeast/la-na-curveball20nov20-story.html
- https://www.salon.com/2015/04/06/judith_millers_pathetic_iraq_apologia_a_disgraced_reporter_rallies_to_her_own_defense/

Further, quoting NYT story "Who Was Right About W.M.D.s in Iraq?: by Hanna Kozlowska October 17, 2014", while there were soldiers wounded by nerve gas from 2004-11, it further stated, "The weapons were not part of massive, active stockpiles that the United States set out to destroy by waging a war that would last eight years, take thousands of lives and leave Iraq in chaos. They were “remnants of long-abandoned programs, built in close collaboration with the West,” Mr. Chivers writes."
https://op-talk.blogs.nytimes.com/2014/10/17/who-was-right-about-w-m-d-s-in-iraq/

Hans Blix, UN Inspector on the ground, had stated repeatedly that there was no evidence of an active WMD program. Other Intelligence Services (notably German & French) also concurred there was no real active WMD program in Iraq...
http://www.politifact.com/truth-o-meter/statements/2016/sep/13/paul-wolfowitz/wolfowitz-wrongly-says-germany-france-thought-iraq/

Sanctions were working and Iraq was not an overt threat, certainly not more than N Korea is today and we're not invading that country. However, if we haven't learned the lesson of the Iraq invasion, we might just make the same narrow-minded, bone-headed, jingoistic mistake again...
http://www.motherjones.com/politics/2011/12/leadup-iraq-war-timeline/
reply
[deleted]
1 up, 3y,
1 reply
Bottom line there WERE CHEM weapons, You cant blame bush for them NOT being there then Blame him for not giving troops proper equipment. I have family members that were there, They were there, Is cheney a greedy dick, sure he is but they were there. I am not arguing the fact of us troops being there or not, just the fact that they WERE there. THE NYT article basically says they were old and not dangerous but blames bush for not giving troops proper training equipt etc because they were dangerous. If Bush didnt go in, the Democrats(and GOP) would have been screaming for his head, he was damned if he did or damned if he didnt.
reply
LoneFunman
0 ups, 3y,
1 reply
First, I believe you've lost sight of the point - Bush lied. My meme quotes him, "[Iraq] possesses and produces chemical and biological weapons." He said "PRODUCES" the WMDs - active tense. That was not true. Cheney (and/or Bush) cherry-picked info that "justified" the decision to invade Iraq because he/they knew an ONGOING WMD program most likely didn't exist. Without the lie, there wasn't a strong case for invasion, hence the deceptions. Bush was President and ultimately responsible. That's the real bottom line.

As for the rest of your statement... originally, I never blamed Bush for anything except the lie (and tacitly, the resulting invasion). And I'm just curious, how can you criticize the NYT (or anyone) for condemning Bush/Cheney sending troops into Iraq without proper chemical-weapon gear and training? If the Commander in Chief was certain there were chemical weapons, of course he is to be blamed for sending in troops unprepared.

Finally, your conclusion that Bush was "damned if he did or damned if he didnt [sic]" may have been true. But if there was no invasion and he was 'damned if he didn't', wouldn't it have been better to be damned because he DIDN'T kill and wound thousands of American service-people, DIDN'T cause 100s of thousands of innocent civilian casualties, DIDN'T waste over a trillion dollars, DIDN'T have the ongoing war in Afghanistan get out of control and DIDN'T create ISIS? Better to be damned at the time and exonerated later... or at least damned for doing the right thing,

BTW, thank your family members for their service and thank you for supporting them; I support them, too.
reply
[deleted]
1 up, 3y,
2 replies
whatever , You thank my family members for their service, but basically call them liars, but were there..dont respond, I will not read anything from you and Hopefully you will do the same from me.
reply
[deleted]
1 up, 3y,
2 replies
reply
[deleted]
1 up, 3y
Dont bother.
reply
LoneFunman
0 ups, 3y,
1 reply
All those comments were made before 2000. All those comments were made before new sanctions, before Hans Blix and the inspections, before many allied and domestic intelligence services arrived at the conclusion there were no active WMD programs. Were there leftover weapons? Absolutely. Was Saddam trying to hide the few he had left? Most likely. Was invasion an unnecessarily extreme response? Absolutely. I'm going to assume we disagree, that's cool.
reply
[deleted]
1 up, 3y,
1 reply
reply
LoneFunman
0 ups, 3y,
1 reply
I'm so glad you got us here. Yes, in the year or so leading up to invasion, many Congresspeople seemed to think Saddam had an active WMD program because they didn't have all the pertinent information due to the omission/cover-up of evidence by the W Bush Administration. That has been my point from the beginning. If these people voiced opinions based on lies, how does that support your point (if you even have one)?
https://www.politico.com/magazine/story/2016/01/iraq-war-wmds-donald-rumsfeld-new-report-213530

Once they found out they were lied to, most all of those who initially supported the invasion came out in strong opposition to the war and regretted their vote (and, most likely, some of those quotes)...
https://en.wikipedia.org/wiki/List_of_Congressional_opponents_of_the_Iraq_War

Further I ran down the Pelosi quote because I remembered she was one of the 23 Senators and 133 House Members that voted against the resolution authorizing invasion. The beginning of her speech that you cited ends, quote, "These costs to the war on terrorism, the loss of life, the cost to our economy, the cost in dollars to or budget, these costs must be answered for. If we go in, certainly we can show our power to Saddam Hussein. If we resolve this issue diplomatically, we can show our strength as a great country, as a great country.
Let us show our greatness. Vote no on this resolution."

The Graham truncated quote is also misleading. You noted, "We are in possession of what I think to be compelling evidence that Saddam Hussein has and has had for a number of years a developing capacity for the production and storage of weapons of mass destruction." But you left out the rest... "At what point we do what President Kennedy did in 1962, which is to make that information available to the American people and to the international community as a predicate for whatever use of force will follow, is going to be an important strategic decision for this administration." He subsequently also voted 'NO' on the invasion resolution.

Both the Pelosi and Graham quotes are cherry-picked excerpts out of context. It reflects the same dishonesty and deception that the W Bush administration exhibited that led to an unnecessary, costly and bloody mess. How ironic.
reply
[deleted]
1 up, 3y,
1 reply
LoneFunman
0 ups, 3y
I never said you didn't. Not the point.
reply
LoneFunman
0 ups, 3y
I don't know what you're talking about, I never said you or anyone in your family were liars. Cheney, definitely. Rumsfeld, Wolfowitz, Poindexter and many others? Undoubtedly. Bush may have just lied to himself. Are those your family members? Even Trump says Bush and his Administration lied us into unnecessary invasion. Do you think Trump is calling you and your family liars? I still respect your family, their service and your support of them. You have your opinion and we just disagree. Are we countrymen or not? Why the vitriol?
Show More Comments
Flip Settings
memes
gifs
other
Created with the Imgflip Meme Generator
IMAGE DESCRIPTION:
GREAT MOMENTS IN GOP PRESIDENTIAL HISTORY; "I neither took part in nor knew about subsequent cover-up activities"; "I did not trade arms for hostages"; "[ Iraq ] possesses & produces chemical and biological weapons"; "This Russia thing, with Trump & Russia, is a made up story"
hotkeys: D = random, W = upvote, S = downvote, A = back
Feedback
<![endif]-->