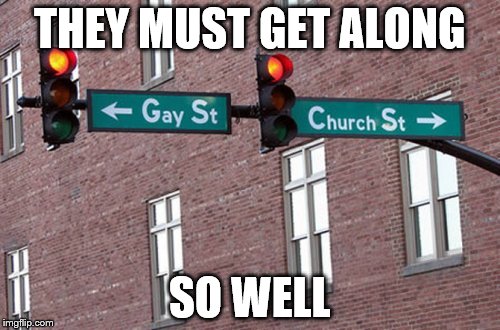 I actually used to go to a church youth group where there was one person who was transgender and they were okay with it. Now, if that person was asking the church to marry him to somebody, that most likely wouldn't have happened. But the church was accepting of him nonetheless and didn't shove anything down his throat.
LaChancla
1 up, 2y,
1 reply
im a demacrat i go to church
The_beez_kneez
1 up, 2y
okay...
fathergrimm
0 ups, 2y,
1 reply
Not true. Look at warnock. He is a f**king reverend. So no. Not just republicans are Christians. There's many more send that are Christian too. I just don't have the time to tap the letters all out right now
[deleted]
0 ups, 2y
Who is this Warnock?
[deleted]
1 up, 2y,
1 reply
OlympianProduct M
6 ups, 2y
Show More Comments
Flip Settings
Created with the Imgflip Meme Generator
IMAGE DESCRIPTION:
THEY MUST GET ALONG; SO WELL
hotkeys: D = random, W = upvote, S = downvote, A = back
Feedback